The Journey to Middle Land Narsarsuaq, Greenland: Or There and Back Again

The late August mid-morning sun is hot on our shoulders as we set off from the Narsarsuaq Hotel past the small international airport where a UN aircraft is taxiing down the runway. This airstrip, constructed on the out-wash plain of the Kuussuup glacier, was originally built in WWII by the as a transit base (called Bluie West One) for flights to . The base was superseded after the construction of the larger air base in North Greenland, which still operates as a base today. Bluie West One closed in 1951 and reverted to Danish control in 1958.

during the summer season,  is served by flights from , , and , and year round by the Air Greenland fleet of aircraft and helicopters. The arrival by airplane into this airport is unforgettable, the approach taking you spell-bindingly low over the immense ice cap and then down the narrow fjord squeezed between high mountains containing vast volumes of water that was frozen aeons ago. 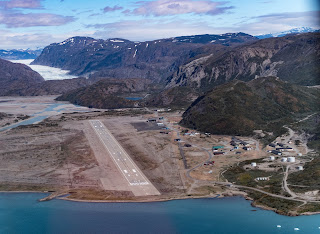 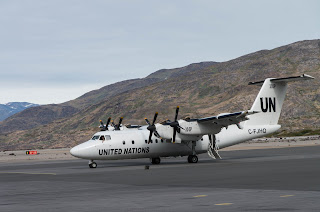 The population of Narsarsuaq is only about 160, with the airport and tourism being the main sources of employment. Not much happens in this place with a mere handful of weatherboard houses, a small supermarket and a couple of drab blocks of Soviet-style flats. Indeed, the largest building is the Narsarsuaq Hotel, with a façade like something out of 1960's communist . When a flight is due in or out, Narsarsuaq temporarily buzzes with activity, before sliding back into a state of torpor. 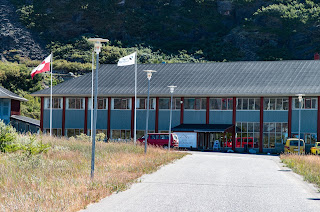 We are beginning a 2-day trek to Mellem Landet, ‘’, a 30 km long and 6 km wide peninsula pincered between two glaciers. Sounding for all the world like something straight from the pages of a Tolkien novel, Middle Land is a popular area for a one day hike to get up close to the nose of the Kuussuup glacier on its western flank which, being no longer anywhere near the sea, is accessible. But we have opted to do a longer hike across to the eastern flank of the peninsula to view the Qooqqup glacier which is actively calving into the sea, rather than a pile of dirty melting ice!

We stride out along an old tarmac road which takes us NE for several kilometres through an area named . Here the US 188th was sited, betrayed now only by the sight of the gaunt stone chimney breast of the Officer’s Club and some crumbling concrete foundations. After this we hit a rocky track. This passes through a picturesque out-wash plain named Blomsterdalen ‘the flower valley’, dominated by the chalky turquoise coils of the . The flowers are long past their prime, with just a few straggly looking harebells and the withered stems of fireweed now sporting heads of fluffy seed, visible by the side of the track. The hand of autumn lies quietly across the landscape, the bilberry, dwarf birch and grasses turning eye-pleasing shades of gold, russet and red. 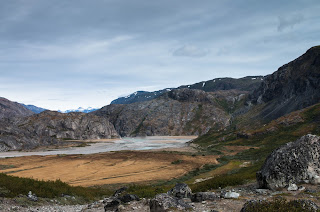 After weaving through golden fields where the hay has been mown, the route, now a narrow path, leads to the bottom of a wall of rock. There follows an almost 300 metre climb up a cliff face by the side of a small waterfall onto the Middle Land plateau. This ascent via a rough pathway is quite steep in places and passes through dwarf trees and over rock worn to a fine polish by the passage of countless feet. On the steepest sections, thick ropes have been fixed in place, presumably by the tourist companies who take clients to visit the glacier.

From the top of the cliffs, a magnificent view of the terrain we had just covered opens before us. There is indeed something almost Tolkienesque about this fantastical landscape of rock sliced in two by an icy behemoth that has spewed enormous quantities of gravel and sand onto the vast out-wash plain that stretches for kilometres down to the jade coloured waters of the Tunulliarfik Fjord dotted with icebergs. 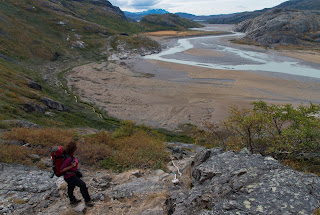 Feeling rather like a Hobbit leaving the Shire for stranger lands, we branch off the pathway that most day trippers take to see the Kuussuup glacier, striking out across the rocky shore of a lake and over the river feeding the falls, before beginning a further gradual 300 metre ascent onto the wild spine of this rocky peninsula. The going is tough across trackless rough ground, but we are distracted from our physical exertions by glorious views of the Kuussuup glacier which unfold as we climb higher, and the large juicy bilberries which pepper the ground providing a refreshing snack. 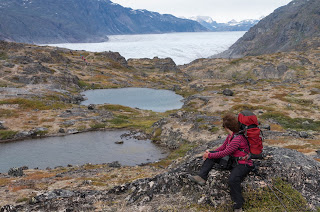 Eventually the ground levels and we make good speed over wiry grass interspersed with desiccated black and green lichen. We now pass a series of lakes, one of which is sited in a boggy amphitheatre that offers good protection from the wind, and which has a perfectly dry level patch close to plenty of dried wood for our stove. A perfect place to set up camp. 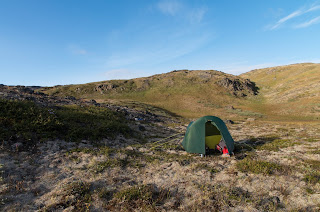 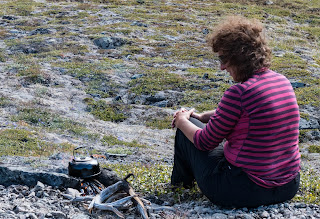 We sit in the open tent sipping the Brennivín we had brought from , watching the sun slip behind the nearby mountains, turning the sky and clouds into a canvas of colour with all the exuberance and vitality of an Impressionist masterpiece. As twilight sets in, it does not get really dark here yet, we retire to our sleeping bags with our freeze dried dinners to escape the chill breeze blowing off the nearby lake. Tomorrow we have just a short 1.5 km walk to a viewpoint overlooking the Qooqqup glacier. 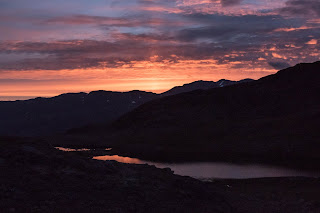 However, the maps available for are pretty poor and the colour graded trekking tracks indicated on them do not always reflect the topography, or the difficulty on the ground, and I've grown used to nothing being 'easy' in Greenland!

It’s another glorious day and following a quick breakfast, we zip up our tent and take just our valuables, essential gear and some water for the short hike to the viewpoint. A gentle climb uphill behind our camp takes us onto a ridge which we follow for a few hundred metres before descending towards a large lake. 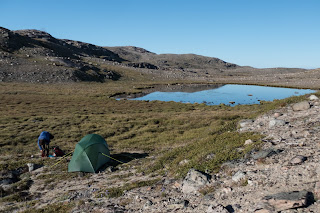 We now face our first obstacle in the form of a 75 metre deep ravine with near vertical walls and a river that runs into the lake. After much time wasting, we manage to descend from the ridge into the ravine via a steep gully, where we cross the river and pick up a path of sorts on the other side which gradually climbs towards the viewpoint. 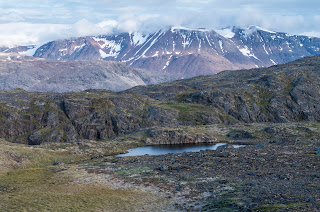 The ground hereabouts becomes a contorted mass of rock riven by small gullies dotted with metallic green pools which isn't really depicted on the map. Under an oppressive sun, we pick our way slowly over obstacle after obstacle until we arrive at the foot of a scree slope beneath a 100 metre high rocky knoll with the viewpoint at its summit. Our hearts sink. It’s an impenetrable fortress of sheer cliffs and crumbly outcrops which shower rock down onto us the minute we attempt to scale it. Not to be defeated after making it this far, Martin sets off to explore another way up. Unable to remain in one place for too long due to the swarms of midges and mosquitoes that have made an unwelcome appearance, I ramble amid the rocks, startling a lone ptarmigan which rises on whirring wings, letting out a visceral ‘ker-ker-ker’ cry which shatters the silence giving me quite a fright! 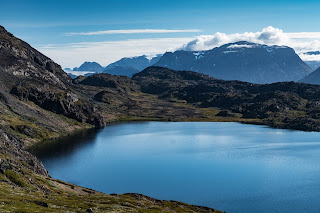 Martin suddenly bellows to me triumphantly from atop a ledge halfway up the western side of the knoll. He’d found a route. I dump my walking poles, and he directs me to climb up a precarious rock face followed by a scramble onto a sloping ledge thick with vegetation. From here its an easy stroll to the top of the knoll where a spectacular vista of the glacier, until now hidden from view, is finally revealed. 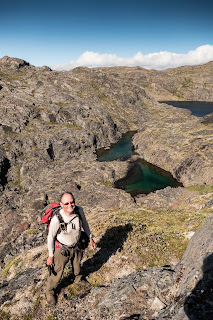 Staring into the brilliant sunshine, I blink at the sight of the gnarled and shattered nose of the mighty glacier which has completely choked the fjord with a stream of icebergs, thousands of them, from the size of a suitcase to miniature floating islands, white and porcelain-smooth, or crinkled, cracked and tinted turquoise, complete with hillocks, gullies, cliffs and tiny waterfalls. This geological ejecta continues right to the end of the fjord, which appears to be 3-4 km away, but is in reality over 15 km, so clear is the Arctic air making it near impossible to judge distances. Every so often the ice creaks and groans as it continues its inexorable journey towards the sea. 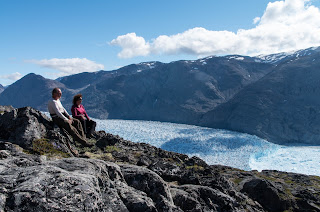 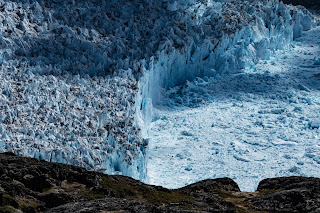 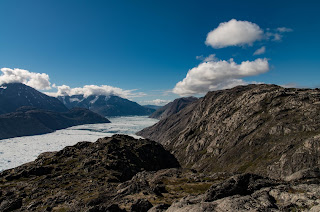 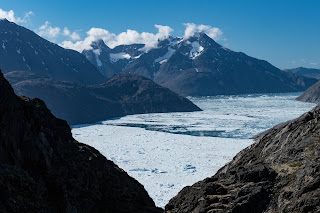 I could sit here forever taking in this stupendous geological spectacle, but we’re being bitten alive by armies of midges and mosquitoes which are doing battle with us like a horde of ferocious Orcs! Safely down from the rocky knoll, we make for our tent, finding a far easier route that takes us along a narrow beach on the SW side of the large lake which had been impossible to see on descent, before a less steep climb onto the ridge above our camp.

The lake has something of a Mediterranean feel to it, its clear waters tinged aquamarine and turquoise, the arc of its pebble strewn shore glowing golden in the midday sunlight. We sit on the small beach fringed with cerise pink fireweed splashing our faces and listening to the melodic tinkle of minute waves rippling ashore, until the insects again make it impossible to remain any longer. 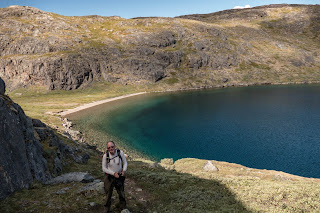 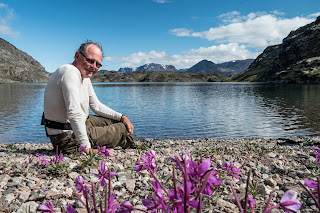 After a quick lunch we break camp under a sky that is beginning to cloud over. The atmosphere turns oppressive, as if the Dark Lord of Mordor has cast his malevolent shadow across , and the intense silence becomes quite unnerving. Dark cloud rumbles around the snow streaked peaks of the mountains across the Kuussuup Glacier; the gray of rock and sky become deeper, more profound, and the white of the glacier is almost incandescent. The weather is changing and I momentarily sense the onset of winter. 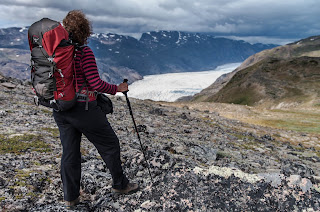 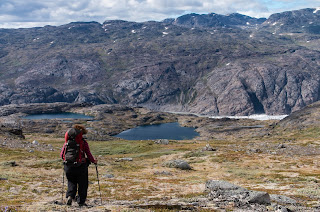 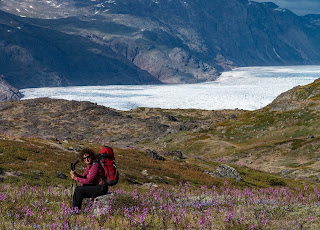 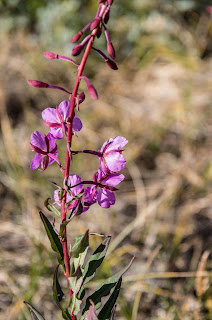 At the top of the falls, we see great shards of sunlight radiating down over Blomstersdalen from gaps in the cloud, causing the serpentine coils of the  to gleam with an unreal lucidity. We make rapid progress down the pathway by the falls and are soon winding our way along the track above the river. We cast long shadows upon the ground in the late afternoon sun which shines straight into Blomstersdalen, making the rock of the steep cliff face we have just traversed glow like the walls of a gilded temple. 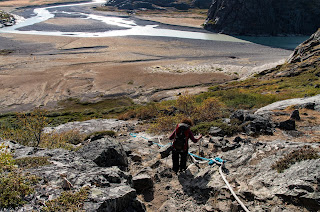 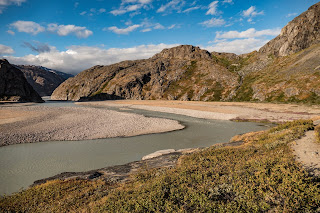 The walk back to the Narsarsuaq Hotel along the stony track and then the tarmac road feels endless and my feet protest against the monotonous pounding. After what seems like an eternity, we finally reach the outskirts of Narsarsuaq, as still and silent as a ghost town, its buildings bathed in the golden tones of the sinking sun. Glowing specks of candlelight illuminate the windows of the hotel's restaurant, and, like a moth to a naked flame, I'm instantly drawn to them. 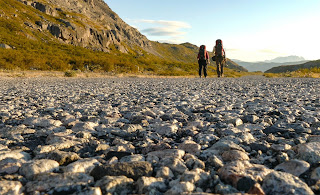 Famished, I salivate with anticipation at tucking into the musk ox steak that is sizzling on the restaurant grill and satiate my thirst with a cool pint of silky black Qaleralik, my favourite Greenlandic craft ale. Our two day 27 km trek to Middle Land to see the Qooqqup glacier and back again, has been like a journey straight from the pages of a Tolkien novel, one brim full of adventure through an epic and forbidding landscape which almost defies description. For gazing at the nose of the glacier was like staring straight into the Eye of Sauron; it is a sight that will remain indelibly etched behind my eyes.

Watch our video of this trek at: https://www.youtube.com/watch?v=S0DFMLa3L_M
Posted by Kernowclimber at 16:22 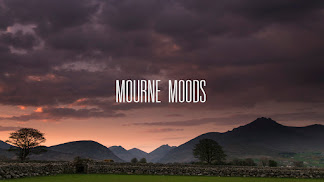